Ohana Owl is a 2017-introduced and toy-only character.

Ohana Owl is sweet, caring and loves to curl up in a ball and tell stories to her owls Yawn and Kani.

Ohana Owl has white skin with blue eyes, brown eyebrows, and pink lips. She has grey feather details on her cheeks and forehead along with her nose. She has long blue hair that reach down to her hips. She has no animal type ears or a tail. Ohana wears a molded-on bodice that is light blue with a moon, clouds, and stars on it. Her skirt is removable with a pink band and a jagged cut. The skirt is a purple and pink ombre color with moons, clouds, stars, and rainbows on it. The look is augmented with a purple fur stole. Her shoes are orange slippers with a furry texture on them and they have owl faces. She wears a pink sleeping cap and has a blue sleeping mask with an orange beak on it. 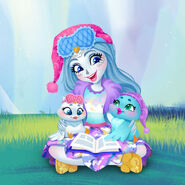 Add a photo to this gallery
Retrieved from "https://enchantimals.fandom.com/wiki/Ohana_Owl?oldid=6899"
Community content is available under CC-BY-SA unless otherwise noted.