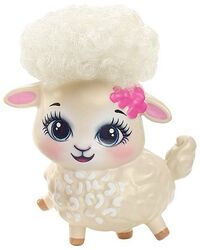 A defining characteristic of Enchantimals dolls is that they all come with one or two figurines representing the respective enchantimals' animal companions. Figurines tend to depict cuteified deformations of animals and are about 1.3 inch high, but exceptions exist.

Figurines to accompany the dolls goes back to the initial formula of Monster High of 2010. At that time, all characters were assigned and packaged with their pets. The first to break this tradition was C.A. Cupid at the end of 2011 as the start of various cost-cutting measures. Pets and with them figurines were gradually phased out from that point on, if with some attempts to bring them back, notably in 2013 with the introduction of Jane Boolittle. When Ever After High was launched in 2013, the dolls did not come with figurines, but the characters were all said to have pets, opening up the possibility for separate pet-centric toys that came to fruition in 2016 with a series of bobbleheads.

Enchantimals is the first franchise of its lineage to centralize the character-pet combination, bringing figurines back from their retirement. Each doll comes with at least one figurine and two in the case of small theme packs. An upgrade the Enchantimals figurines enjoy compared to their predecessors is that nearly each of them has a part that is not plastic. This can be hair on the head, as in the case of Flag, a furry tail, as in the case of Caper, fuzz around the neck, as is the case with Sprint, or an item of clothing, as is the case with Jayla. Examples of all-plastic figurines are Compass and Bounder.

Community content is available under CC-BY-SA unless otherwise noted.
Advertisement