Fanci Flamingo is a 2017-introduced and all-around character.

She is voiced by Karen Strassman.

Fanci is single minded and self assured: she keeps her eyes on the prize and doesn't stop until she's got it. Although she can be a little skeptical, she is nothing short of hilarious—naturally quick witted—she can't help but make you giggle.

Fanci has light pink skin with pink eyebrows, green eyes, pink lips, and a grey nose. She has blue and pink feather makeup around her eyes. Her pink hair is tied back slightly and down to her hips. She has no animal ears or tail. Fanci wears a light blue bodice with a pattern of flamingo feathers and yellow and pink flowers in a watercolor style down the middle. Her skirt is removeable with a teal elastic band around the waist of the skirt. The skirt is white with pineapples, tropical pink flowers and leaves, and pink dots on it. The look is augmented with a white fur stole. Fanci's footwear consists of pink platforms with tropical leaves on the noses and flamingos at the top of the shoes. She wears a teal party hat with feathers and teal and pink flowers on the hat. 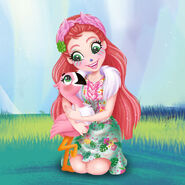