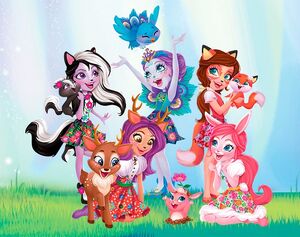 Enchantimals are inhabitants of the world of Everwilde. They are humanoid beings with animal characteristics such as ears and tails, who are bonded with a matching animal through an unspecified ritual. Some enchantimals even have two companions.

The enchantimals are described as having been "created", though the exact meaning of that choice of word, whether it's literal or philosophical, has yet to be explained. A substantial portion of the enchantimals have made their home in Wonderwood Village in the Wonderwood section of Everwilde. Meet the Enchantimals: Enchanted Everwilde

According to the voice that was explaining who was showing the cave paintings within the Glaciar in the sky 1 billion years ago the aurora in Snow Vallery exploded into a enchant boom thus creating the enchantimals. To enchat the enchantimals. To embuded the Enchatimals with special powers of Enchantments the Aurora created a bestie for each one. It's the Besties that give enchnatimals the ability to perform enhancements. If Enchantimal is separated from their bestie for so long, the bestie will turn into a magical beastie and the won't return to normal until the bestie and enchnatimal are reunited. Secrets of Snowy Valley

The enchantimals usually have powers that resemble the animals their based off of. For example Patter, who represents peacocks, can fly. and Bree, who represents bunnies, can jump high. Enchantimals  can also do enchantments using plants and natural elements. According to Patter, enchantimals can't use their powers for selfish purposes.

The rituals are usually implied, instead of being told directly. The rituals is usually a common interaction between a n enchantimal and bestie.

Community content is available under CC-BY-SA unless otherwise noted.
Advertisement